Home›Newsroom›Black revolution: No for EU!

From “For Macedonia to be in one piece” up to children’s songs about Hahn could all be heard at today’s protest of the initiative “For a Joint Macedonia”. A citizen journalist who wished to remain anonymous sent a photo and video from today’s protests in front of the EU Info Centre, where EU Commissioner Johannes Hahn is expected to arrive.

With trucks and trumpets, those present greeted Hahn. “There is no Ilirida, no FYROM, only Macedonia!”, said one of the protestors who was present there. Others sang the famous “We have one thought”, while another more elderly citizen sang her version of a children’s song. 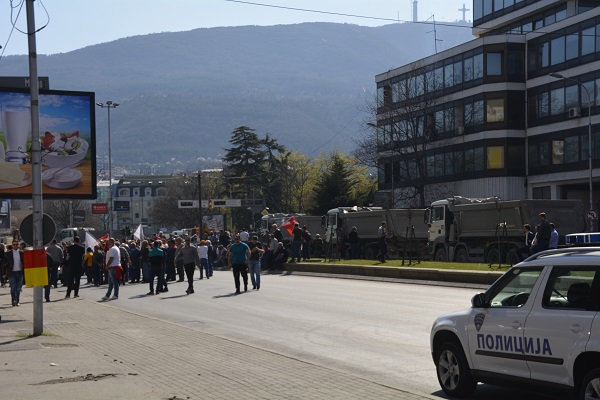 Part of the participants put up posters with the writing NOT in EU. After the participants were sure that Hahn was no longer in the building of the EU Info Centre, they headed towards Parliament. One of those who were present yelled “They took him out from the back, come on!”