Home›Newsroom›Nationalistic contamination of a children’s event

Nationalistic contamination of a children’s event

On April Fools’ Day, on the day of laughter, several adults tried to stop with threats several children from singing who were participants in the children’s festival “Vinozito” (Rainbow) because they were singing in Albanian, who along with the children participating in the “Zlatno Slavejce” *Golden Nightingale) Festival were participating in the event on the Square in Skopje. The Security Service reacted quickly and we continued with the event. This is how the current political atmosphere, unfortunately, affects even the smallest ones, writes Adem Ymeri on his Facebook profile. 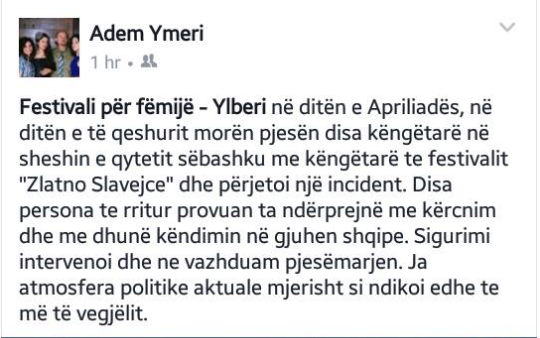 Tomislav Tanevski, longtime manager of “Zlatno Slavejce” (Golden Nightingale), who on his behalf and on behalf of his colleagues apologized to the children participating and to their parents for the incident that took place at the event organized by DKC Karpos and the City of Skopje, also added to the above Facebook comment. 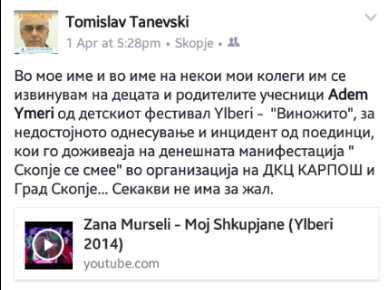 (Tomislav Tanevski – On my behalf and on behalf of some of my colleagues I would like to apologize to the children and parents participating, Adem Ymeri from the children’s festival Ylberi “Vinozito” for the inappropriate behavior and incident caused by individuals, which they experienced at today’s event “Skopje is laughing” organized by DKC KARPOS and the City of Skopje…Unfortunately, there all kinds of us.)

The political crisis is increasing, and unfortunately the children are more frequently involved in unpleasant incidents. Even the stage on which the event took place was  decorated with yellow and red stripes, which in this past period have become the symbol of the initiative “For a Joint Macedonia”.

Political abuse of a children’s event