Home›Newsroom›Illegal landfill in Kicevo, not a priority of the local government

Illegal landfill in Kicevo, not a priority of the local government

The illegal landfill in Kicevo is a source of contagions. It is located almost in the center of the city, behind the hospital, and near the “Temnica” River that flows into the “Treska” River. The danger of infections is high, even though almost one year now, more specifically from spring last year, the city waste and dump is not thrown here. Nevertheless, as a citizen journalist who wished to remain anonymous reported to CIVIL, residents whose yards and gardens are just several steps from the illegal landfill suffer the side effects from the decaying litter, waste and dump. 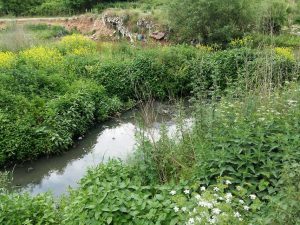 This citizen journalist adds that residents also complain that when the waste is burned in summer, that an unpleasant odor is spread, with smoke everywhere and that many citizens have problems breathing.

There are rumors among the people in Kicevo that those from the communal company are now dumping the waste at a temporary location in the area “Crvenica”, near the rural settlement in the Municipality of Oslomej. He says they also mention some options for building a sanitary landfill within the old digging site of REK Oslomej, but that there is a lack of analyses on whether the wastewaters that penetrate into the soil would mix with the underground waters.

The worst of all is that the local authorities, regardless of the political provenance, have been announcing for years permanent solutions for the problem with storing the urban waste, and there is nothing in sight for its realization.

The following video and photos taken on the ground also speak of the current situation.