Graffiti with hate speech that call for nationalism have appeared on the walls of a building in the ownership of the Municipality of Veles. The municipal organization of SDSM and the SPM are located in the same building, along with the Regional Office of the Trade Union of Macedonia. As one citizen journalist reports, who wished to remain anonymous, a citizen activist through a comment on photos published on Facebook, called on the Municipality and Mayor Cadiev to respond to such vandalism on a municipal building.

An employee in a public enterprise, while at work, during working hours (from 7.00am – 3.00pm), paid by the citizens, replies with the words “you bastard, it was good for you when you were painting, wasn’t it”. The same person, who with threats is settling scores with citizen activists on the social networks, according to the citizen journalist, has also been noticed of giving logistical support to senior party officials, also during working hours, by using public resources. 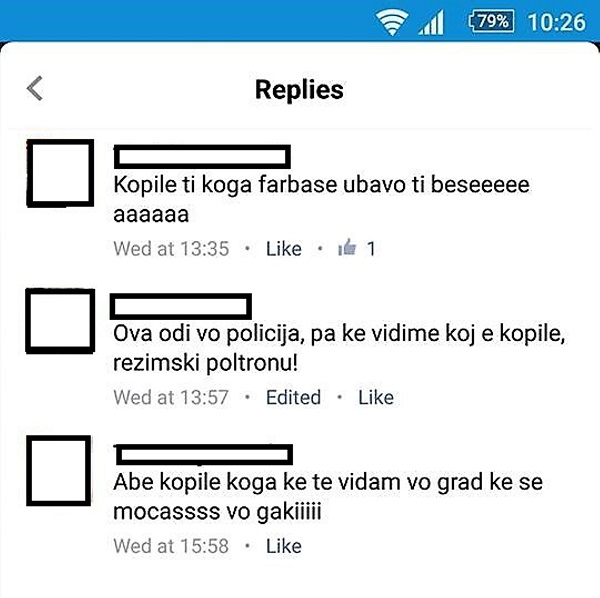 The same person also sent a public threat with the words: “Hey bastard, you will pee your pants when I see you in the city”, with the purpose of intimidating the citizen activist.

This is not the first time for administration workers at the local level in Veles, according to the information from the citizen journalist, to carry out party agendas and to sow hate speech. These and other threats have been registered even back in 2013, during the local elections.

Such threatening messages with hate speech have appeared in several cities throughout Macedonia, and are directed towards representatives of civil society organizations or supporters of the opposition.