CIVIL today awarded five more prizes for the most successful and most influential stories of citizen journalists.

This time the awarded stories are about the environmental problems and urban chaos, as well as about the violence and hate speech that were ever more present in this recent period, given the political and social situation in the country.

One of the two fourth prizes went into the hands of an anonymous citizen journalist for the photo-story “Follow your dreams”.

“Follow your dreams” and “Cancelled by VMRO-DPMNE” is a kind of dialogue between the graffiti on this wall in the center of Skopje. 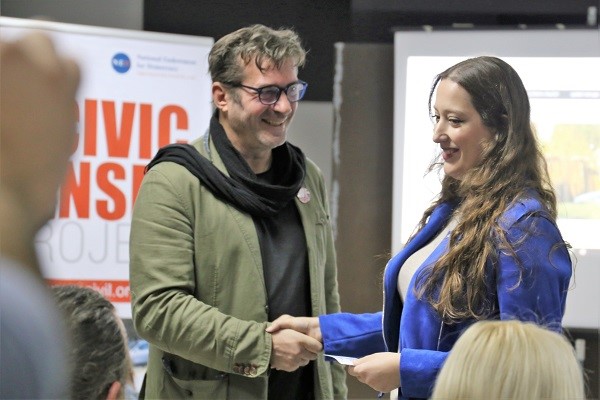 The other fourth prize went to journalist Melisa Murik for the story “Insulting graffiti about a homeless woman in Skopje”. On one of the green areas in the Skopje neighborhood of Madzir Maalo, near the National Bank or Public Revenue Office, an improvised little house from boards, cardboards and metal sheets emerged several months ago. In that little house lives a woman. Some time ago, someone had spray-painted on the “wall” of the house and left the message “Witch”, says an anonymous citizen journalist. Yesterday the improvised home of the woman was demolished. The Minister of Labor and Social Policy, Mila Carovska, stated that they will try to find a solution for her home.

This time the third prize went for the photo-story “Death for Hatred” of citizen journalist Emrah Rexhepi.

This photo speaks about hate speech graffiti in the City Shopping Center, which later in a creative way was turned into a constructive and positive message. 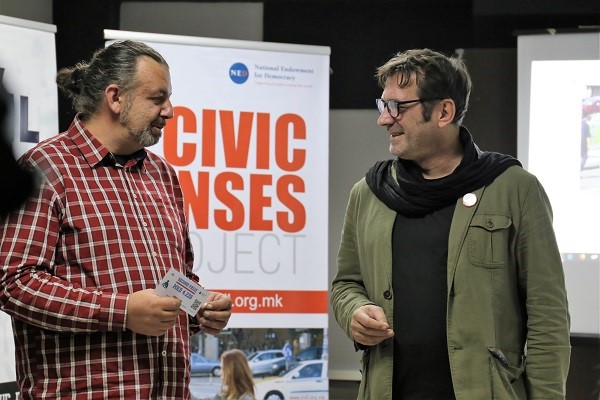 Citizen journalist Viktor Popovski, received the second prize for the story “Defenders of the Constitution attack a boy on the street in front of Parliament” , who reported from the ground that during the protests in front of the Parliament of Republic of Macedonia against the constitutional changes, some of the participants had attacked a boy passing by with a bicycle. 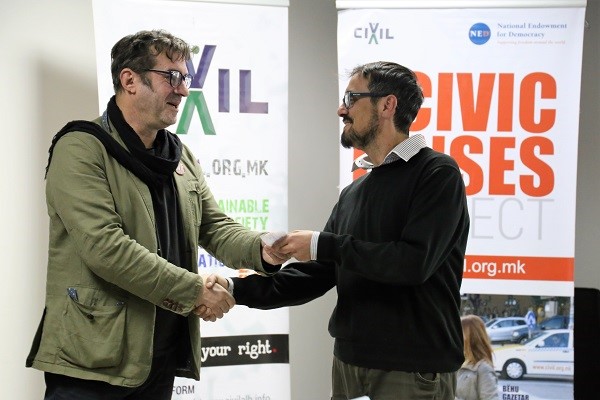 The first prize, most deservedly, again went into the hands of citizen journalist Damjan Temkov, whose stories always create enormous attention in the public, in the media, and also in the institutions.

This time Temkov is awarded for the phot-story “Slicked-back mayors and cheated citizens” – a photo from the lot in front of the Orthopedic Clinic “Majcin Dom” in Aerdrom. His photos were the first that warned the citizens that the construction on the controversial lot is starting. Following this story, the media and social networks were flooded by an avalanche of reactions, after which protests were organized. The Mayor of Aerodrom has temporarily stopped the construction at the site, whereas the final decision is still being expected.

CIVIL awards the most successful and most influential stories of citizen journalists every two months.

CIVIL invites all citizens to participate in the #CivicLenses project, and to become part of the big family of citizen journalists around the world who, with their activism, change society.

Furthermore, citizens may send videos also for the initiative #IDemandanAnswer. The idea of this initiative is, through a video or selfie video, for citizens to ask politicians or a public figure questions, and CIVIL will publish the recording on its online channels. If the question is provocative, or if the citizens simply want to remain anonymous, citizens can record a subject or a certain situation while they are asking the question. Depending on the answer and the reaction of the institutions or those competent to whom the question is addressed to, these videos also enter the awarding cycle.

Civic Lenses is a project of CIVIL that opens opportunities for citizens to publish their stories freely and without censorship. The project is financed by National Endowment for Democracy.

Part of bitola's Bair for decades has ...