CIVIL – Center for Freedom today awarded five prizes for the most successful stories of citizen journalists within the framework of the Civic Lenses project, which the organization has been implementing for the fourth year.

This time, the awarded stories refer to violation of human rights and social (in)justice, with a special emphasis on the right to vote, but also the elementary human rights, such as the right to water.

At the awarding ceremony, the President of CIVIL, Xhabir Deralla, made an address on behalf of CIVIL, who highlighted that this project is another introduction of new qualities and standards primarily in activism, but also in the media.

“Citizen journalists show reality as it is, and not as the propaganda machinery portray it”, stressed Deralla.

Enis Aliov won the sixth prize, for the story that refers to a local problem that the citizens of the Municipality of Stip are facing.

Aliov demands a response from the Stip competent authorities on when and how they plan to solve the problem with wrongly parked vehicles throughout the city.

“Double standards of the election administration” is the story of an anonymous citizen activist, winner of the fifth prize. This story is about the decision of the members of the Election Board to declare 90 ballots invalid, after having concluded that they had forgotten to put a stamp on them.

Winner of fourth prize is Dejan Ristov, citizen journalist who has many times showed that he knows how to use his capacities as a citizen activist, in the direction of disclosing problems in his municipality. Ristov’s awarded story talks about the black campaign in Veles during the presidential elections. 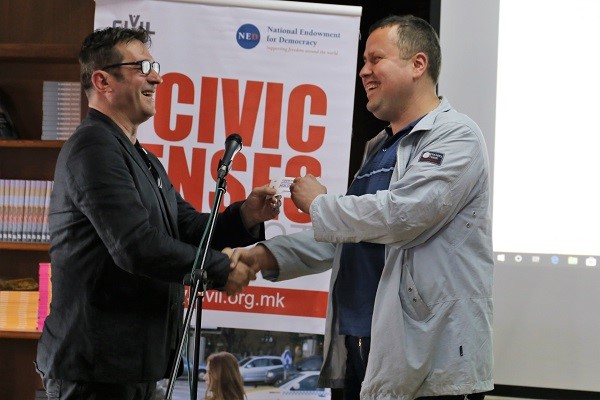 “Veles is known for its false news. This story was an additional motive for the fight against false news. On a day just before the election silence, when actually everyone is fighting for as many votes as possible, instead of specific proposals and programs, this time again we saw a black campaign and propaganda”, said Ristov at today’s awarding ceremony. Ristov has won prizes for citizen journalists several times until now.

The story by Simona Maneva Zivkova about the violation of the Electoral Code won the third prize. 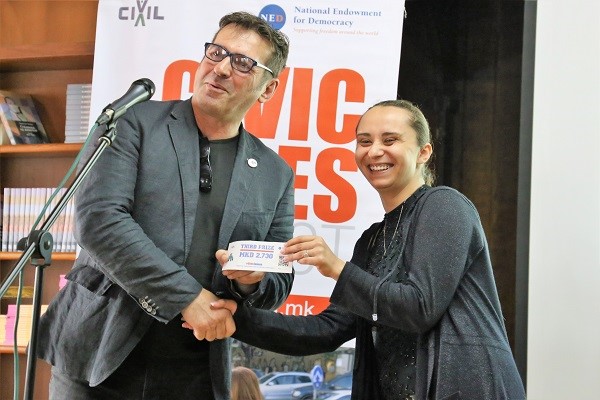 According to the citizen journalist, in this specific case, the Election Board acted contrary to the legal regulations. The authorized representative was not called on by the Election Board. In addition, voters were not ensured conditions for secret voting.

The video of citizen journalist V.K, which speaks about the voting conditions in the primary school “Kole Nedelkovski”, in the center of Skopje, won the second prize. The polling stations in this school are inaccessible for persons with disabilities, and not only for them, but also for elderly citizens who need to climb to the second floor to exercise their right to vote.

Jovana Zdravevska is the winner of the first prize for the story Citizens of Bair, Bitola: The politicians will not deceive us with the water! 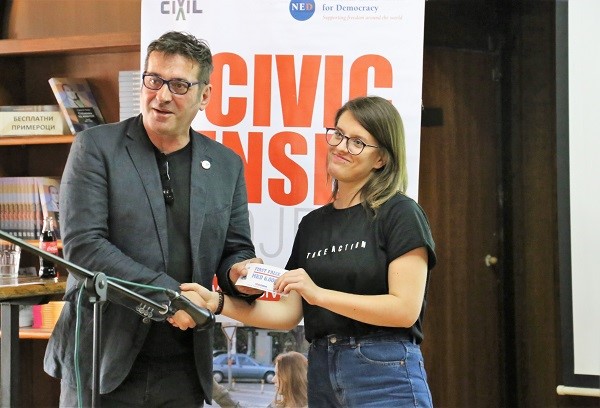 The story is dedicated to the citizens of the neighbourhood Bair in Bitola, where for years they are trying to realize the elementary right to have water in their neighbourhood. To this day, they are living without water! The only time the Mayor of Bitola has ever visited the residents of this neighbourhood was after CIVIL Media published the story, but so far has not managed to solve their problem.

These are the second last prizes that CIVIL is awarding to citizen journalists. Therefore, observe, record and report!

All reports of violation of human rights, ...