As always, voters will have a hard time in making an informed choice on October 17, when they will be able to exercise their fundamental right, the right to vote, at free, fair and democratic elections.

Unfortunately, this election process too has turned into a ruthless and unscrupulous fight for power. The monitoring of the election campaign notes that some of the participants use all means possible, both acceptable and unacceptable, in order to win over the “love” of the voters.

GENERAL IMPRESSION: PEACEFUL CAMPAIGN, WITHOUT INCIDENTS, CIVIL WITH A FOCUS ON IRREGULARITIES

The general impression is that two different types of campaigns are being carried out, of which one refers to the local agendas of the candidates and candidates for positions in the local government, and the second one is a black campaign that is dominated by hate speech, insults and disinformation against political opponents.

Overall, the campaign, still is peaceful and without greater incidents. In any case, CIVIL’s monitoring is focused on irregularities, namely, cases that deviate of what can be called a normal course of the election process.

CIVIL’s monitoring reports of new cases of hate speech and black propaganda in the electoral context. The topic of the Tetovo tragedy dominates, which is used for discrediting political opponents. Organized attack on social networks is noted by supporters of opposition parties who are making vulgar insults and threats under posts with information and content on SDSM party activities.

The conclusion that it is a matter of an organized pursuit on the social networks is based on analyses of CIVIL’s Monitoring Team, which recognizes the profiles, dynamics and vocabulary that are used to be commented at the same time in many other places on the social networks, and certainly supported and multiplied by some of the media in the country.

Yesterday as well, on the 11th day of the election campaign (October 7), the main target of the black campaign on the social networks and in some media weresenior representatives of SDSM.

HATE SPEECH AND THREATS: GRCEVA WILL KICK AND ARREST

“Mila will be punishing if in bookstores there are textbooks. Have I woken up in the country of Orwell or in Nazi Germany? These should be kicked. I am appalled, ashamed, I despise them… and will arrest them, God willing!”, wrote Grceva on Twitter.

In addition to the hate speech and threats of violence, this post of former MP Grceva also contains disinformation, that is, manipulation of facts in the part in which she claims that the Ministry of Education and Science “will punish if in bookstores there are textbooks”. It is a matter of manipulating a previous statement made by Minister Carovska on the importance of digital textbooks. 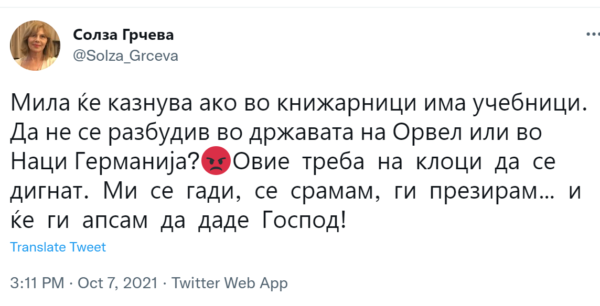 The analysis has arrived of our collaborator, analyst Zharko Trajanoski, titled “Latas continues unlawfully to incite hatred against “Sorosoids”, published today on Civilmedia.mk

“During the rule of VMRO-DPMNE led by Nikola Gruevski, we witnessed how this unpunished speech, which incited hatred towards the “sorosoids”, endangered the security of human rights defenders and of journalists who were stigmatized as “sorosoids”. Are the state institutions going to be silent again as before and not sanction the speech that encourages hatred against the “sorosoids” of Dragan Pavolovic Latas, who is a continuation of the decade-long hate speech against human rights defenders, journalists and media that are stigmatized as ‘sorosoids”? – writes in the conclusion of the analysis.

Today, CIVIL submitted documentation for receiving accreditation for election observation from the State Election Commission. The Organization will observe Election Day with just over 300 mobile observers.

The training for CIVIL’s short-term observers will be held during the weekend (October 9 and 10) from 10.00 am to 5.00 pm. Additional dates for the training seminars will be provided during next week.

The weekend editions of “Election Report” (October 9 and 10) will be published in a text format.

ELECTION REPORT #12 was broadcast live at 11:15 am (Oct. 8, 2021) on CIVIL’s Facebook page and YouTube channel. Downloading of this content is welcome. We ask editorial offices to indicate the source and link to the original.