Citizen journalists reporting on the protests in front of the Parliament

Citizen journalists have become active these past two-three days, with articles from the protests, as well as with “catching” hate speech on the social media, where they have witnessed and documented explicit hate speech. Citizen journalist Marin Gavrilovski, sent a photo from yesterday’s protests and testimony to hate speech and nationalistic messages of the protestors. 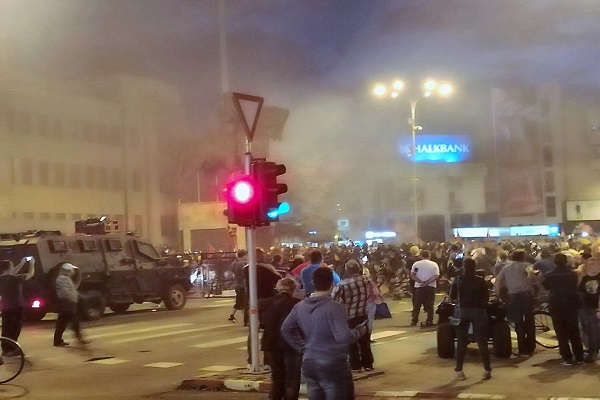 At yesterday’s protests in defense of the name, protestors clashed with the police. Protestors led by the Komiti, threw Molotov cocktails and stones at the police, which responded with tear gas.

CIVIL published a call to citizen journalists to send articles in which hate speech is documented and detected, but also to the institutions to take appropriate action:

“Articles with documented hate speech will be published on CIVIL’s media platform, but at the same time, the relevant institutions will be alerted about this with a demand for such behavior to be sanctioned. Also, the organization will alert the institutions and the public about the explicit hate speech used at some of the public events (protests) during this period, and will demand for appropriate legal measures to be taken against the organizers of such events and against persons spreading hate speech and calling for violence. The contribution of citizen journalists is valuable in this joint effort of ours to help our society recover” – is said in CIVIL’s announcement.

Wheelchairs – not available for patients, ...