Home›Uncategorized›The institutions do not recognize discrimination!

The institutions do not recognize discrimination!

“’Was it you who changed religion, shame on you?!, pulling her scarf and insulting my wife…”, says Shaban Konaj from the Skopje neighborhood of Madzari in a conversation for CIVIL Media, telling about the obstacles and problems he and his family have faced over the years, just because they are “different” from their neighbors and fellow citizens.

After his wife had changed religion and started practicing the religious traditions imposed by the religion, she faced direct psycho-physical attacks, but didn’t report them to the police because she doubted their work. He says that one should give a person a chance to solve every incident through dialogue, instead of reporting it to the police.

The biggest problem for him and his family was that they could not enroll their daughter in the nearest primary school “Naum Naumovski Borce” in Madzari in the school year 2013/14, because of discrimination.

“All the problems began in the very beginning. My child was only six and a half years old when I registered her in the first grade. Primary education, according to the law, is compulsory. Parents are legally required to provide their child education, and that is what I did. I strictly adhered to these laws and respected them, but the school did nothing in return. Because she wore a headscarf, which is in accordance with the religious regulations and religious freedoms, children physically harassed the little girl. They pulled her scarf, threw erasures and paper at her, called her ‘Gypsy’, ‘Shqiptar’!... The child told me everything. I immediately turned to the school principal and told him that measures had to be taken because of the children’s behavior. I asked him: why do you allow such things to happen in your school?”, says Konaj.

The Principal of the school replied to all this with a rhetorical question: “Well, you know where you enrolled your child?”.

Konaj also submitted a written complaint to the school, and then to the Ombudsman and to the Commission for protection and prevention of discrimination.

“I received a negative reply twice from the Commission for protection and prevention of discrimination. Because of this, I also complained to the Ombudsman. The Ombudsman gave me the same answer, that they have the competence to solve this problem, in addition to the Commission for protection and prevention of discrimination. In their reply they wrote me that there is no discrimination. However, I personally know what my child had went through, and I personally recorded with my cell phone all those elements that surround the entire school, such as hallways, classrooms, offices where there is hate speech”, adds Shaban.

“After several complaints submitted to the Ombudsman, finally, one was taken into consideration and the State Education Inspectorate was ex officio informed. They called me, we spoke for them to have insight into the case, they took my statement and made an extraordinary inspection in the school. The inspector had established precisely what I had been preparing as evidence for the complaint to the Commission”, adds Konaj. 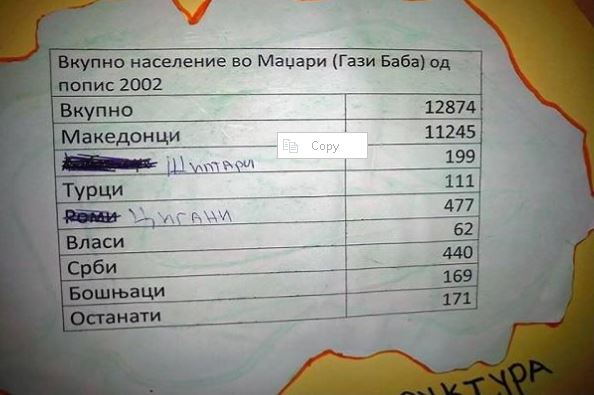 Following the inspection, the school principal was replaced with a new principal.

“The inspector advised me that it would be best to enroll my child in another school, because they might revenge my daughter because I had reported them. I listened to the inspector and registered my daughter in the primary school “Braka Ramiz and Hamid” in Suto Orizari. I take her to school every day, because she cannot travel by herself with two busses. The problem does not end here, as we are also not entitled to a free bus ticket, since my child is not with special needs”, adds our interlocutor.

He adds that problems exist and that they won’t be solved as long as the government doesn’t take any measures and doesn’t sanction those who are spreading national or religious intolerance.

From the primary school “Naum Naumovski Borce” – Skopje, they replied that the student H.SH., according to Article 2 and Article 4 of the Law on primary education, had the right to regularly attend classes in their school.

“The student continued her education in the the primary school “Braka Ramiz and Hamid” upon the personal request of her parent K.SH. The school principal has ceased to perform his duty after the end of his mandate and in a regular procedure. The statements of K.SH are not true”, the school says.

He previously sent to CIVIL photos of hate speech on ethnic and religious grounds.