Bukovo landfill, June 7, 2017, 5:00pm. Our fears that dogs have been captured by the communal service and dislocated, have shown to be true. These souls disappeared overnight, after wandering on the square (photos of that period in the following post https://m.facebook.com/story.php…). They had come on Friday at no time with a white van, and you would think they were unloading waste and not lives. How awful, we pay them with our money for them to do such a horrifying thing, to order such a dreadful thing, terrible! 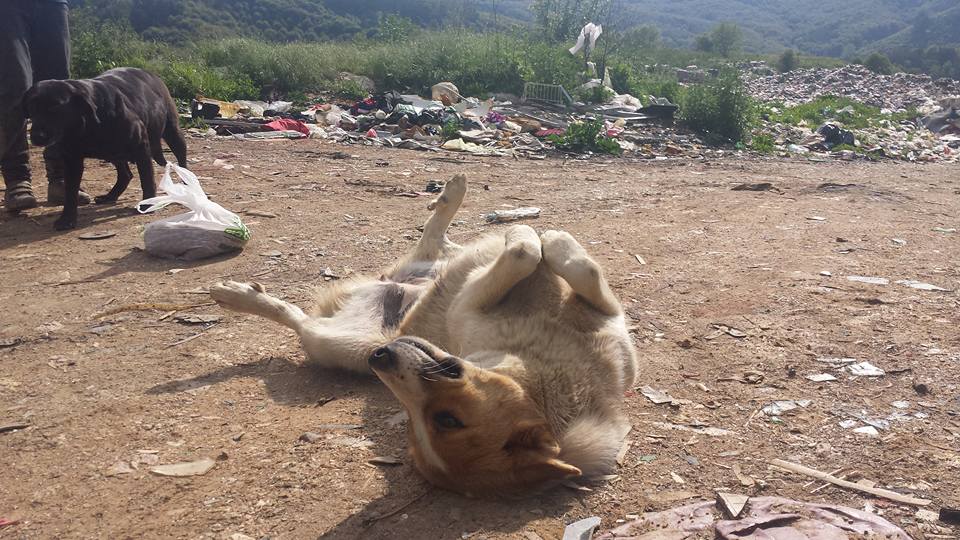 The black one is pregnant, before giving birth, she is about to be a mother, but was dumped like an unnecessary rag. The light colored one was sterilized by Animalia with funds from a municipal project and was returned where it was found (the wound from the operation is still visible). We were supposed to take the black and white one and prepare it to go to the Netherlands where it was to be adopted by foreigners who showed interest for it, we searched for days through the city only to have people from the Public Enterprise Komunalec dump him too like this. We found them terrified, not having eaten for days, since there are dogs there from before that dominate and protect their territory and the food they find in the waste. This is equal to an attempted murder! Among the last photos right before the entrance of the landfill there is a puppy that has been ran over. That is how dogs not used to such a surrounding and scared under a car end up, which can also cause a life to be lost in a car accident.

This is extremely illegal and cruel, and if none of the responsible are held accountable for this terrible thing, then it will only send a bad message for the city and the citizens.

The veterinary inspectors are silent, and now we the citizens have to do their job, to investigate, to control, since there is not a gram of humaneness left in those who have occupied key positions and who were supposed to serve as our examples. Here’s what kind of example they are. I urge the people from the Public Enterprise Komunalec not to call me on the phone explaining as they have in the past after each founded criticism directed at them. Their lies to me and other activists speaks of how low their souls are, souls from which little puppies suffer. As of today, except through the institutional way, there is no other way through which I will speak with them. And with evidence we can see their true face. See you in court!

We are the media in Tetovo